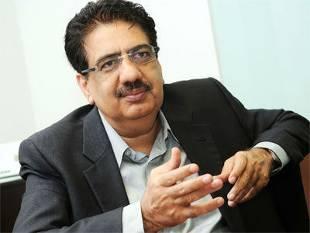 It was 3 am when the train stopped at Ratlam. A boy, just 8, stepped out of the train attracted by the fascinating scene outside. The train starts moving. Someone shouts. The boy is jolted out of his dreams and runs to catch the train. He catches the side bars but fails to pull himself up. He keeps running and tries again and again but fails each time. Fear and doubt creep into his mind. The train gathers speed. A critical choice faces him — give up or take a chance and keep running. He runs again, faster, taking one more chance to get on the train; feeling hopeless but not giving up, yet. Seeing the boy losing the battle, a vegetable vendor runs towards him and throws him into the last compartment of the train, to be reunited later with his family, sleeping unaware. I have always wondered why did I keep running? Why did I take that chance despite fear and doubt overpowering my mind? Did my taking the unlikely chance of running create the magic of someone helping me to get on the train?

That lesson has stayed with me all my life - someone out there is waiting to throw you on a train you believe to have missed, if only you decide to take that chance.

I took a summer job on a poultry farm as a young kid. Our job was to gather eggs from the henhouses on one side of the farm and carry it to the storage sheds on the other side. We followed orders for a day or two. Then, we started experimenting if we could deliver all the eggs in a shorter period of time.

After trying every method we could think of, it became clear that none of them really made much difference. We grew tired of experimenting and went back to doing the job as it always had been done.

I realized that tinkering with the process of egg-carrying or just trying harder would never change the fundamental nature of the job. You have to do a different job rather than keep doing it differently. I have tried hard to live that thought at every decision point in my life and have thus ended up doing something radically different every seven years.

3. Say it in a way that people never forget

The year was 1983 and we had just settled in for our first day of class in XLRI Jamshedpur when 30 adivasis stormed into the classroom, stabbed our professor and attacked some students before vanishing into thin air. Professor, Father McGrath, had blood all over him.

Even as we were trying to make sense of what had happened, Father McGrath rose to his feet and said it was a staged show. "Now write what you have just seen," he said. As it turned out, each student's version of the events was different. The exercise was meant to demonstrate why we should not believe everything we see in times of stress, however my take away from it was quite different - I learnt that day that if you want to say something important, say it in a way that people will never forget, or don't say it at all!

Cut to April 2005. I was facing a room full of HCLT employees waiting to hear what their new leader had to say about the future of our company. Suddenly on my signal a Bollywood track started playing and I started dancing. This simple act demolished the halo that surrounds a leader and five minutes later we got down to some serious and honest introspection . I had announced the arrival of the "Employees First" Culture-the Mc Grath way; making a fool of myself through dancing was a small price to pay for it.

4. Rejection is the best start point in life

After only three weeks of my induction training , I was approached by a senior executive who told me that I probably did not have a future with HCL. I was shocked. "Unless you do something different, you won't get beyond next week."

I spent that evening pacing my room, frustrated and angry. I felt that the executive, organization and the world was wrong and unfair. Then at one point, I looked at myself in the mirror. I did not see the world-beating , MBA, the future top executive I imagined myself to be. Instead, I saw a young trainee who was not seeing reality very clearly and needed to look within to find answers.

That was my first experience with looking in the mirror, recognizing the truth and deciding that a change was needed. This experience came in handy many times in my life and has helped me acknowledge my faults, stay honest to myself and build teams that are unafraid of the truth.

5. Press the accelerator not the brakes

Not long ago, on a flight I got talking to a copassenger . He was a retired race-car driver. He told me an interesting incident of how he had once been in the middle of a race when his brakes failed. "What did you do?" I asked intrigued.

"So what should you do?" I asked. "Speed up," he said. "Accelerate past the others and then take whatever action is necessary." His story impacted me profoundly and has become my mantra to get out of tough situations in business: speed up to get past the competitors and find open room to maneuver. Get the market share and then maneuver to squeeze in the profits.