Uttarakhand floods: The Two Minute Solution to Coping with Disasters 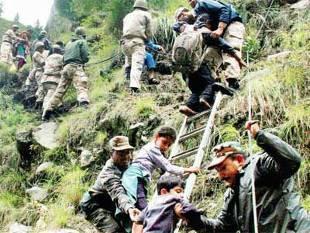 For someone who has spent most of his childhood in Uttarakhand and trekked through remote villages in the magnificent mountains of the Himalayas, I feel not just pain but also a sense of violation seeing the maninstigated natural disaster unfold in front of my eyes.

The region is on tethers, nature is wounded and thousands of army personnel are still battling the odds to ensure we don't lose innocent lives for decisions and actions on which we should have spent two minutes more. "Why?" is the question many are asking. Deforestation, human greed, exploitation of the poor, lack of education, mindless projects in the garb of development, lack of accountability for inaction — any or all of these could be the reason(s) why we have lost so many lives.

But whatever the alibi, it is sure to be forgotten soon. Going by past trends, there will be pity, sympathy and blame-games followed by short-term memory loss, and soon, we will go ahead as if nothing had happened. India is home to some of the oldest civilisations and we are proud of our heritage and history.

But I wonder whether future generations will say this about us. Or will they see a generation utterly self-involved and selfish? India's future will be secure only when Indians wake up to not just their rights but also their responsibilities. We need those extra two minutes more from each one of the billion Indians, every day, to think of Indians first.

These two billion minutes we have each day could solve many problems and save many lives. These minutes hold the promise of changing mindsets where development will be viewed from the lens of inclusiveness and long-term sustainability. When you throw plastic in the river, uproot a tree to plant it in your backyard, cut a tree to build a dream home in the hills, build roads from nowhere to nowhere, build dams to feed the unending hunger for urbanisation in the hills, do take those extra two minutes and think Indians first.

I'm not anti-development; the key is to ensure sustainable and environmentally sensitive development like the Amazon Region Protected Areas (Arpa) programme in Brazil and other state-led initiatives that have slowed down the Amazon deforestation and biodiversity hazards considerably with the involvement of local communities.

As I write this piece, millions of Brazilians are on the street because they care. The Jasmine Revolution was caused because the common man cared. Indians are fighting against corruption as never before because we care. Now we need to care about the fine ecological balance given in trust to us by the previous generations.

As a young kid, these mountains and rivers were my family members, and the flora and fauna were part of my community. As the images of the vast devastation started flashing on TV screens, I thought of how we have let down these mountains, how we have abandoned the community and turned our backs to the responsibility.

Now we will spend billions in rebuilding homes and in trying to reinstate the faith of people in our country, but what about nature, who will earn her respect and who will say we understand and care? I am a relentless optimist and believe that when we Indians decide to turn a corner, we are unstoppable.

Thus, there is always hope if we look at this disaster as a reminder of the twominute responsibility we owe to our nature and biodiversity, cities and villages, humans and hills. Just two minutes every day in our own way. Think about it. My two minutes start now, and yours?

(The writer is vice-chairman, HCL Technologies)