Nayars Gift an Auditorium to their Alma Mater, Campus School 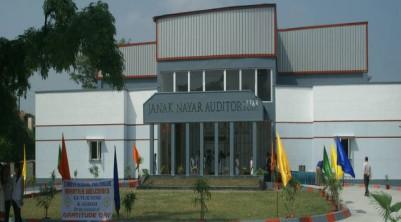 The Auditorium named after Nayar's mother, is the family's tribute to the School where both Vineet and Anupama studied and Mrs. Janak Nayar taught for 27 years during the family's early days in the town.

The 15,000 sq. foot state-of-the-art Auditorium can seat 800 and boasts of modern features like latest audio-visual equipment, a 30 feet aerodynamic ceiling for the sports and gaming arena with two indoor badminton courts. The unique design of the Auditorium allows natural light to filter through the high roofs thus there is no artificial lighting needed in the day time. During winters the design enables natural sunlight to filter through in most parts of the facility making it very energy efficient and child friendly space. 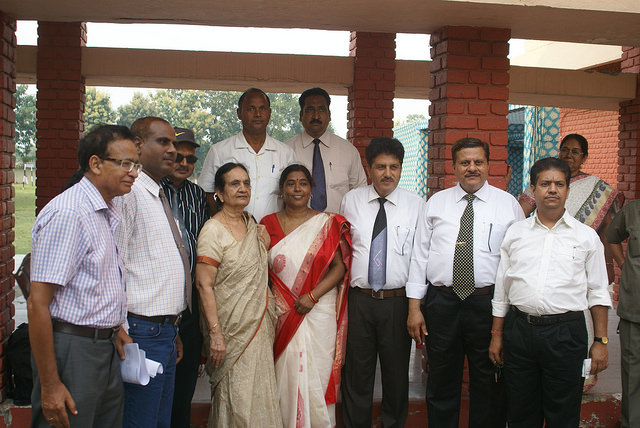 The Nayars invested in this initiative as they saw a dire need for a space to host performing arts and indoor sports in the school. Anupama and Vineet personally oversaw the design and construction of the facility over an 18 month period and the final Auditorium was gifted to the school in its finished form with a hope that this will give a boost to the faculties of theater, debates, elocution, dances and sports, not just within the school but also in the neighboring communities.

"Our School was in great need of a central, large space that was flexible enough to accommodate the extraordinary array of events produced in this very active community and at last, the Janak Nayar Auditorium provides us this", said Dr B.C. Pathak, Principal of The Campus School. "The Campus School is grateful to count the Nayar family among its most faithful and passionate supporters. Their generous philanthropy, pursued with both vision and humility, reflects a profound connection to The Campus School and everything it stands for."

"It is wonderfully appropriate that this auditorium will always bear the name of a much loved Founding Member and teacher Mrs. Janak Nayar who taught at the Campus School for 27 years and in that illustrious career taught the students not only English but more importantly many precious lessons of life, honed the character of many impressionable minds and ignited their minds with boundless aspirationsÂ, added Dr. Lokesh Varshney, Secretary, Management Committee, Campus School.

Speaking at the inauguration Anupama Nayar and Vineet Nayar in a joint statement said, "We owe deep gratitude to the Campus School for giving us the strong roots of applicable education and infallible character which continue to guide our diverse journeys to date. This auditorium is our small token of gratitude to the School, its students, staff and administrators for these priceless gifts".

About Sampark Foundation-Started in 2004, Sampark Foundation is aimed at creating a million smiles by transforming lives of children, youth and adults through Education, Social Entrepreneurship, Livelihood and Climate Sustainability projects. Founded by business leader Vineet Nayar and his wife Anupama Nayar, the Sampark Foundation has taken many significant early strides and is currently running ten programs covering diverse issues across its focus areas. www.samparkfoundation.org

About Anupama Nayar - Anupama did her Masters in Special Education from Spastic society of India in Mumbai and has worked in the field of special education of differently abled children. In 2004 she co-founded the Sampark Foundation and has played an integral role in developing and mentoring its education programs. Anupama's vision is to help the disadvantaged Indian youth lead a life of dignity and self-reliance so that our nation progresses with an inclusive growth.

About Vineet Nayar -" Vineet is former CEO of HCL Technologies and Founder of Sampark Foundation. He is also author of the highly acclaimed management book 'Employees First, Customers Second: Turning Conventional Management Upside Down'Â. In 2013 Vineet decided to quit his highly successful business carrier and commit his time and personal wealth in pursuit of driving large scale social change with a goal of impacting a million lives in 5 years. He along with his wife, Anupama, set up Sampark Foundation with a mission of transforming lives of children and youth through Education, Social Entrepreneurship, Livelihood and Climate Sustainability projects. At Sampark Foundation he works with a group of believers who have come together for a cause bigger than singular identities; a cause called "unleashing a million smiles".

Besides his commitments at Sampark Foundation, Vineet's philanthropic commitments also cover an Advisory role at the Millions Learning Project led by the ex-Prime Minister of Australia, Julia Gillard. He is also the Founding member of Brookings India .Previously Vineet has served as Governor of ICT, member of the Global Advisory Board of Women Leader's and Gender Parity Program as well as a Community Partner of the Forum of Young Global Leaders at the World Economic Forum. Vineet was cited amongst Forbes magazine '48 Heroes of Philanthropy 2013".