The Reinvention of Vineet Nayar 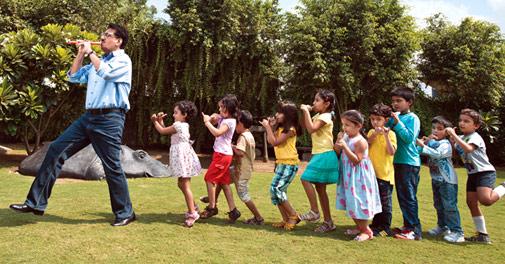 Vineet Nayar walks into his new office in a pair of blue jeans and a blue-and-white check shirt. It's a simple ground floor space in a building next to his home in Noida, east of Delhi, most unlike the swanky HCL Technologies office where he served as CEO until January. But Nayar isn't complaining. This is the office of a philanthropic organisation, Sampark Foundation, he started with his wife, Anupama, in 2004.

The former executive is loving every moment of his new role as development guru in an organisation working to improve the lives of underprivileged children and farmers. "When I made up my mind that I want to bring about large-scale change in the social sector, I couldn't have done that as the CEO of a listed company," says Nayar. "My obsession in life is to improve livelihoods by 30 per cent." For eight years, Sampark was solely run by his wife while Nayar was busy running HCL Tech, India's fourth software services firm. But now Nayar's energies are focused differently. And his friends say his plans for change are not over-ambitious. "Vineet is a quintessentially great salesman, and from that comes a flair for marketing. He did a phenomenal job in changing HCL," says C.P. Gurnani, Managing Director and CEO of Tech Mahindra, who had joined HCL in 1986, a year after Nayar.
Certainly, Nayar has always been known for out-of-the-box thinking. For instance, when HCL Tech founder Shiv Nadar wanted to get into the telecom sector in 1995, most of the industry preferred the pagers or GSM business. But Nayar thought differently. He evaluated the possibility of offering satellite communications at a cost which would compete with conventional levels of wireless telephony. He then started HCL Comnet, an infrastructure management company, and turned it into a $1.3-billion outfit before moving to HCL Tech in 2004. When Nayar became President of HCL Tech in 2005, the company's revenues were $764 million; seven years later, revenues had leapt to $4.4 billion in a single quarter ending in December 2012, just before he announced his exit. "He can think disruptive," says Gurnani. "Comnet was still on the drawing broad, and he was the salesman (who was selling HCL Tech) to the stock market."

At Sampark, the challenges are different. But Nayar is relaxed. He leans back in his chair and talks of his treks in the Himalayas and bike rides to Leh on a Royal Enfield. Nayar is soon planning to scale a 19,000-ft peak. At 51, that's an audacious climb. But age has certainly never stopped him. "I was always young at heart," he says, as he asks for a cup of Earl Grey. He has lost about eight kg since he quit the CEO's office at HCL Tech, and says it is necessary for trekking. 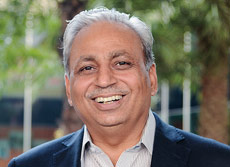 Nadar's star salesman has also set his sights high in his new role as a philanthropist. Even though Nayar still holds the office of the Vice Chairman of the board at HCL Tech, he has divested all his shares and is using that money to fund Sampark's initiatives. He does not share the exact amount, but it is estimated at millions of dollars. He is committed to spend $15 million (Rs 90 crore) of that for the foundation. His plans are influenced by all that he learnt over almost three decades in the infotech industry and his small-town upbringing. Nayar grew up in Pantnagar, which is now in Uttaranchal.

Nayar learnt things the hard way. He lost his father in class nine, and the family was left with only Rs 300 in the bank. His mother and two brothers took turns to support the family. "As I moved from one journey to another, each one was a risk - a risk of personal reputation," says Nayar.

He says Sampark, too, is a risk if he is unable to deliver change. To reduce any chances of failure, he has decided to partner only with governments - increasing the reach and potential scale of the organisation. The three areas he has chosen to work in - education, water, and agriculture - promise to multiply the impact of the work of the 30-member Sampark team.

One of his first projects is to overhaul the education system in Punjab. He wants to touch the lives of 250,000 students in the state who study in government schools. Sampark is taking text-book coaching to the next level and combining it with visual education. It has also abolished the classroom concept and students can come and sit in any class. "It became very engaging," says Nayar. "Books are the most useless way to study maths."

American think-tank Brookings Institution is assessing the project, and once successful in Punjab, Nayar plans to extend it to other states. Sampark has two more projects in the pipeline. It has created a water awareness programme in 19 Tamil Nadu villages with low water tables to help farmers conserve water. Nayar says 16,000 farmers there only get 7.6 million litres, though they require 13.6 million. He has also set a target of improving per capita income in the region by 30 per cent in 18 months. "We work like a corporate house," he says. "I don't know if we can reach there in 19 months, or in 24 months, but we will do it."

Sampark has also taught farmers in a drought-hit sugarcane-growing region, about 50 km away from Baramati in Maharashtra, how to grow alternative drought-resistant crops. The farmers who had never grown anything but sugarcane before were forced to look for alternatives after the drought ruined the soil. Sampark adopted 10,000 farmers, engaged scientists to rejuvenate the soil and helped transform their lives.

Linda A. Hill, Wallace Brett Donham Professor of Business Administration at Harvard Business School who has written a case study on Nayar's management style in her book Collective Genius, says Nayar has always been an innovative thinker. "I think his work is is consistent with his beliefs - he can create an environment of large-scale change," says Hill about Sampark.

That Nayar never wanted to be a CEO is well documented in his book, Employees First, Customers Second, which talks of how he transformed HCL Tech by changing the culture of the company by creating transparency internally. He says he is not an Azim Premji or a Mukesh Ambani, who will remain CEOs for the rest of their lives. Instead, he models himself on former Infosys CEO Nandan Nilekani, the brain behind the Aadhaar unique identification number project. "I really appreciate what Nandan is trying to do. He is trying to solve a mega problem," says Nayar.

But Nayar doesn't believe it is everyody's duty to give back to society. He thinks development is an "intellectual problem" and that people who are fortunate should solve it. He has a good example close to him. Anupama, Nayar's wife, is the other pillar of Sampark. She did a course at Spastics Society of India and has been teaching dyslexic children. In their early fifties, the Nayars are aiming at a second shot at success.