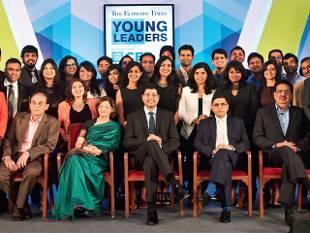 Five top CEOs of India Inc had a free flowing discussion with 50 ET Young Leaders 2016 on the theme 'Millennials' Road to Leadership - Celebrating their strengths and guarding against pitfalls'. Keep the swagger, but also learn patience, the CEOs advised the ET Young Leaders. Edited excerpts from the discussion anchored by ET NOW's Sandeep Gurumurthi.

SANDEEP GURUMURTHI: What do you think are the standout strengths in young millennial leaders?

KALPANA MORPARIA: The confidence and swagger with which they enter my room! Of course, they are somewhat conscious they have to show a bit of respect, so they'll say: 'Ma'am it's a privilege for me'. But none of the body language ever shows it (laughs).

Is that a strength?

MORPARIA: I think it's a huge strength. It's a great statement about their confidence. The other thing that amazed me is their breadth. Some had changed roles, they had their reasons. They were so articulate about why they had changed, what they had learnt, the candour and transparency was great. I learnt more from them than they could have from me.

Noshir, is that something you have observed as well?

NOSHIR KAKA: What struck me was the curiosity: not just to learn from the external world, but also about themselves. The other thing was resilience. Two of the candidates I met were from very humble backgrounds. One was from a poor farming community in Guntur. Now that individual is running a huge amount of funds. And if you look at the journey from having to self-educate to where he is today, that is both spectacular and humbling.

What are the shortcomings they need to guard against?

VINEET NAYAR: I think there is something sweet about this generation, but a little more patience, perseverance, commitment and investment would help — I see them lacking in those. They are so bright, they get new ideas all the time. If they have patience, resolve and commit to things, they will be significantly more successful.

Sanjiv, you have worked with generations of leaders. What is the most striking feature about this millennial generation?

SANJIV MEHTA: What struck me was the sense of purpose. At their age, I certainly did not have that sense of purpose. But there is a bit of a paradox. Because on the one hand they have a sense of focus about society, the environment, even the country but from the ambition perspective, it is about self-actualisation. There 'me' is a big factor. It's also about 'I and my own brand'. That is a paradox.

Kalpana, your exposure to millennials is more than many traditional organisations. In that context, is it more critical for you to adapt to different requirements?

MORPARIA: In our generation, our purpose was the purpose of the company. When I joined ICICI, there was no Kalpana purpose. Kalpana purpose was ICICI purpose, now it is JP Morgan purpose. The distinction I see in millennials today is that it is an individual purpose. It's very distinctive from the way we were.

KNOW ALL ABOUT ET YOUNG LEADERS 2016

PRERIT SHISHODIA, VOLTAS: Millennial leaders are young and restless, looking to drive change. While this is relatively easier in newage organisations, what kind of approach can they employ in traditional organisations where there is resistance to change?

HARSH MARIWALA: I think instead of trying to change, the first choice is to see which organisation you should join. Trying to change an organisation culture is a huge task. If, by mistake, you join one which doesn't have the culture or openness to change, you can try and bring that culture in your sphere of influence, that is your boss or subordinates. But in today's environment, overall there is so much disruption that organisations have to change. And if they aren't amenable to change, then are you in the right organisation?

NAYAR: A change-maker will adopt different approaches. He will first create an example of what will happen if the change happens. He will then return to the organisation and state the results. He will seek to expand it. Here you win the right to suggest. Any time you wish to make the change, when you have not been mandated by the change manager, take small steps and demonstrate results — execute in small steps. If you try to go with big ideas, it scares everybody. Take big ideas and execute in small steps, then people will rally behind you.

POOJA SABLOK, AIRTEL: What are some key differences between traditional and millennial leadership and what can be a good amalgam of both?

NAYAR: Our generation was resource-starved and so, managing resources was the core component for success. So we managed people, inventory, and finances to get more done through sound management. Now resources are unlimited. The opportunities are also unlimited. If you are just a manager now, you will fail. The recipe you need now is not to manage, but influence people. The patience, the resolve to see through is something that this generation has to learn. If you can learn that, you can capitalise on your natural leadership capability and achieve far more than our generation. So influencing is a great word, not managing anymore.

GURUMURTHI: How do you manage conflict between two generations of leaders?

KAKA: There's a challenge for both generations. For me, leadership is not about consensus — it's not a democratic process. Leadership often requires a lot of trust of many individuals, across positions. Trust is hard to earn and difficult to keep. This generation is very impatient because the metabolic rate of change is going up enormously and there is no denying it. Things that were impossible five years ago are a reality now. I don't think millennials should be impatient for role, title, position, then you are chasing the wrong idea.

How to mentor millennial leaders?

ROUSHNI AGRAWAL, MARICO:What differentiates good leaders from great leaders? Is it results or is there something more fundamental?

KAKA: Good leaders often sponsor people; sponsorship is a far more active word than mentorship. We need more sponsorship for women to be in senior positions, as Kalpana (Morparia) and others have shown us as role models. That's the attribute of a leader — where he or she goes out to sponsor the next generation actively as opposed to passively giving advice.

MEHTA: Some of the traits of good leaders are very timeless: it is all about building trust, creating institutions and leaning behind your legacy. These things don't change, they never will. Only leadership styles change with time.

NAYAR: Good leaders are extremely effective in getting results. Great leaders think beyond that. Their business is to enthuse, encourage and enable people to do their best, in a way that they feel they are doing all that for themselves. This is why religious leaders have such massive following and corporate leaders have few. Religious leaders seem to promise a purpose for the individual in you. So, a great leader is one who can find and define a purpose for your existence in an organisation. A good leader will get you the results, but great leaders will find a purpose for your existence in that organisation.

AVNI AHUJA,GENPACT: How do you tell your employees there are purposes beyond profitability?

MARIWALA: Businesses play an important role in the society and they have to add value to each and every stakeholder. Gone are the days when promoters only looked for the well-being of their shareholders. Now they take into account each and every stakeholder — all across the operational chain and the society they operate in. When you take that extra effort to make their lives meaningful, it would have a huge positive impact on your business. Your employees would also be motivated to work harder.

SAGARIKA AYYANNAMAHANTHI, DELOITTE: How tough is it to define purpose for each and every employee in an organisation?

NAYAR: Stop taking advice, you don't need it. Listen to yourself. Put all your might behind your idea.

KAKA: Listen a lot more than you speak.

MORPARIA: You have to be driven by a passion.

MARIWALA: Leverage your strengths to the hilt.