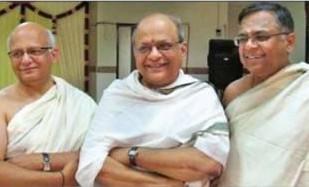 MUMBAI: It could be any hour of the day or night, but as they say, a global CEO is accessible 24x7. That description fits Natarajan Chandrasekaran (53) and that's despite the fact that "he is a CEO who collects miles," in the words of a peer.

Based out of the company's headquarters in Fort, the office overlooking a building where Ratan Tata grew up, Chandrasekaran is known to maintain a punishing travelling schedule, spending nearly three-fourths of his time overseas at client sites.

A long distance marathoner anointed to lead the $108bn Tata conglomerate as executive chairman, a people's person who responds to SMSes and emails even at odd hours, 'Chandra' is identified as a humble man who leads from the front. As a leader, he is known to repose trust in colleagues, empowering them and building team spirit. A Tata Consultancy Services (TCS) staffer recalls how when Chandra took over at the helm in 2009, 30-odd of his direct reportees were enrolled in a boot camp to prepare for a marathon. "More than getting us in shape, this exercise helped us all to bond better," said the TCSer.

Also Read: All you wanted to know about Tata Sons' new boss

Chandra's new-age management style is what transformed TCS into a nimble IT powerhouse. Under his leadership, revenues rose from Rs 30,029 crore in fiscal 2010 to Rs 1,08,646 crore in fiscal 2016. Chandra took charge at 45, the youngest CEO in the history of Tata Group. It was S Ramadorai who had talentspotted him back in 1996 and tasked him with overseeing IT implementation for a key client, GE. "His strengths are building great teams, problem solving abilities," Ramadorai told TOI, adding that Chandra raises the bar each time.

In his own admission to TOI in an earlier interview, Chandra, who is a lifer at TCS, had said: "I have never had a dull day in office."

Coming from a family of diabetics, Chandra took to long-distance running to stay fit. This has made him more patient, perseverant and observant, qualities that are expected to stand him in good stead as he takes on the diverse challenges at Tata Sons.

Chandra who hails from Namakkal in western Tamil Nadu, graduated in applied sciences from the Coimbatore Institute of Technology and went on to do a postgraduate degree in computer applications from the Trichy regional engineering college. Today, he lives in a sea-facing apartment at Worli in South Mumbai with wife Lalitha and son Pranav.

Given his achievements in the digital domain, experts said Chandra was well placed to steer a group, which has traditionally been a brick-and-mortar play. His effective but non-confrontational approach can be gauged from what Nimesh Kampani, chairman, JM Financial, has to say — "Chandra believes one can have opponents, but not enemies". Plus as the classic insider, he may well be the ideal person to negotiate the group's intricacies.

"Chandra as executive chairman would exercise his right through the value he brings to the Group rather than the position he holds. He is strategic in outlook, yet cost focused and granular in action, which is a mark of a great leader. By nature, he is very hands-on," said Vineet Nayar, who was MD of HCL Technologies.

(This article was originally published in The Times of India)