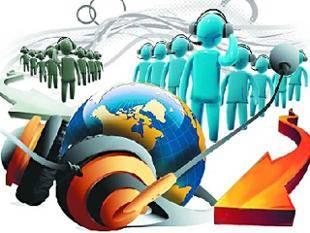 Tech companies, both American and Indian, poured millions of dollars towards lobbying the US government for favourable policies on issues such as immigration, trade and taxes in 2016.

According to data accessed by ET from the Centre for Responsive Politics, Microsoft, Cognizant Technology Solutions, Yahoo, Qualcomm and Alphabet (Google) were the top firms lobbying the US government on the issue of immigration in 2016.

While Microsoft spent a total of $8.7 million towards lobbying in 2016 alone, New Jersey headquartered-Cognizant -which has a large workforce in India -bumped up its budget by 25% to spend $1.68 million in 2016.

Rivals TCS and Infosys lobbied at an individual level as well, even though with significantly smaller budgets. Indian IT companies also lobbied at an industry level through Nasscom, which spent over $4,40,000 in 2016, an increase of 25% over previous year. 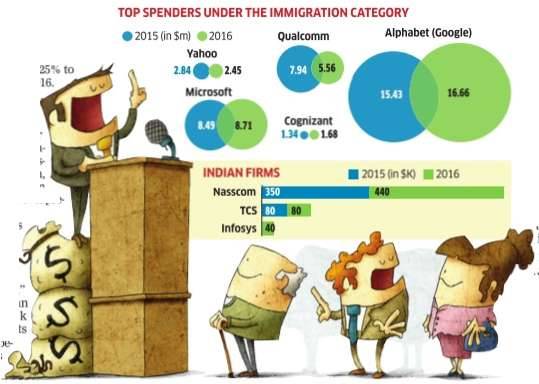 “These companies have tried to buy the government the American way-which is what lobbying is: legal bribery ,“ said Indian-American academic Vivek Wadhwa. “Their efforts may be futile now because Trump is pandering to the racist groups who helped elect him.Indian companies can expect the worst,“ he added. TCS, Infosys and Cognizant declined to comment.

Ron Hira, associate professor at Howard University said that he expects a spike in lobbying in 2017.“Whenever there is a chance of changes, the lobbying increases,“ he said. Google doled out $16.6 million followed by Amazon's $11.3 million in 2016.

Facebook spent $8.69 million trying to squeeze in favourable policies on issues such as patents, privacy, data security, movement of skilled workers. Trump's presidency has got off on the wrong footing with America's tech companies. Last November, Trump's chief strategist Steve Bannon had expressed reservations about the number of south Asians heading tech companies in the US.

Patrick Thibodeau, national correspondent, Computerworld, told ET that Trump's ban has become a rallying cry for the tech industry. “They are not only protesting the ban, but they are reaffirming support for broader immigration reforms that make it easier ­ not harder ­ for people to come into this country .“

He added that the fallout from the seven-country ban may make it harder for Trump to push for other immigration reforms. Vineet Nayar, former CEO of HCL Technologies, said that since today's leaders are being elected on basis of huge mandates, the role of lobbyists have diminished.

Nasscom, which has been engaged in lobbying on this issue for several years, has engaged the services of lobbying firms Wexler & Walker Public Policy Association and The Lande Group. It is also planning to meet policymakers in the US in February.

Shivendra Singh, head global trade development at Nasscom, said that the body has worked with various stakeholders -like think tanks, politicians, policy makers -to bring home the point that Indian companies support 4,11,000 jobs in the US, contribute by way of $5 billion in taxes and work with 75% of the Fortune 500 companies.

“Lot of people think that software is nothing but low-end coding and H-1B is cheap labour. We have to counter that argument, the industry is doing much more than that.“ He added that even during the Barack Obama administration, the H-1B visa fee was increased first in 2010 and was doubled in 2015 which altered the level-playing field for the industry . “India took US to the World Trade Organization on that issue. We will see on how things come up now,“ said Singh.

(With inputs from Neha Alawadhi)