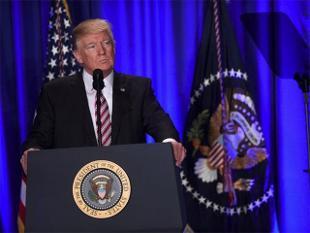 Tata Consultancy ServicesInfosysWipro and others are already at work to hire more Americans, as the Trump administration is moving to tighten a work-visa programme they depend heavily on to send Indian engineers to work on projects at client locations in the US. The potential H-1B visa curb has emerged as the gravest threat in recent times to Indian technology companies, which get as much as 60% of their revenue from the US.

In India, these companies hire fresh engineering and science graduates in hordes and train them in writing software codes. It isn’t easy to replicate the strategy in the US. Besides the higher cost involved, a majority of students for STEM (science, technology, engineering and mathematics) courses in US universities is foreigners — primarily Chinese or Indians — and not Americans, according to software industry association Nasscom and HR heads of IT companies.

“The problem is on the supply side, a constraint faced by all companies,” said Shivendra Singh, vice-president of global trade development at Nasscom.

To overcome this, companies are adopting a calibrated strategy, of hiring locally and bridging the skills gap by taking workers from India on non-immigrant visas, including H-1Bs, he said.

The US produces 237,826 graduates a year in the space of engineering, manufacturing and construction, show data released by the World Economic Forum in 2015. The US Department of Labor estimates that there will be about 2.4 million unfilled STEM jobs by 2018, with more than 50% of these in IT-related fields. About 80% of Indian students in the US are in STEM fields, but under a new Bill moved in US Congress, work visas will be hard to come by.

If the US wants more IT jobs to go to Americans, it has to start from within by first producing enough skilled professionals, said an immigration expert.

“It is unfair to penalise companies for hiring foreign H-1B professional workers,” said Farhan Sethna, an immigration attorney in the US. “If Congress doesn’t want foreign workers, fix the US first. Encourage math and science, not just professional sports.”

For IT companies, hiring more Americans will dent the margins they have fattened up by sending cheaper Indian engineers on short durations to carry out projects of large clients at US locations. This is an area that Trump is targeting as well. The Bill introduced in the House of Representatives last month proposes to double the minimum wages under H-1B visa programme, making it practically nonviable for foreign companies to send large numbers of skilled employees to the US.

Nevertheless, IT services companies like Infosys, TCS, Wipro and HCL Technologies are going ahead with their hiring plans in the US since they can’t risk losing businesses in their biggest market, even as they are also lobbying hard against the legislation

“Now, the pressure on Indian IT companies like ours is to hire more local US talent. But there is a huge supply-demand gap in the US as far as tech talent is concerned,” said an executive at Infosys who didn’t want to be named. Infosys is making inroads on US campuses through competitions and offering internship programmes.

Wipro, too, has adopted a similar strategy. “Wipro is taking all measures to grab the top talent at campuses in the US,” a spokesperson told ET.

Meanwhile, a delegation of IT companies led by Nasscom is soon heading to the US to smoothen out the relations between Indian and US IT industry.

Former chief executive of HCL Technologies, Vineet Nayar, however, has a different take on the issue. “If in India we can train thousands of non-tech graduates to code in 90 days, the same can be done in the US,” he said.

The companies should make use of the huge incentives given by state governments in the US to set up their facilities there, he said. “We should focus on creating local pools of talent as done in Vizag, Lucknow, Nashik, Nagpur and Coimbatore where none existed.”