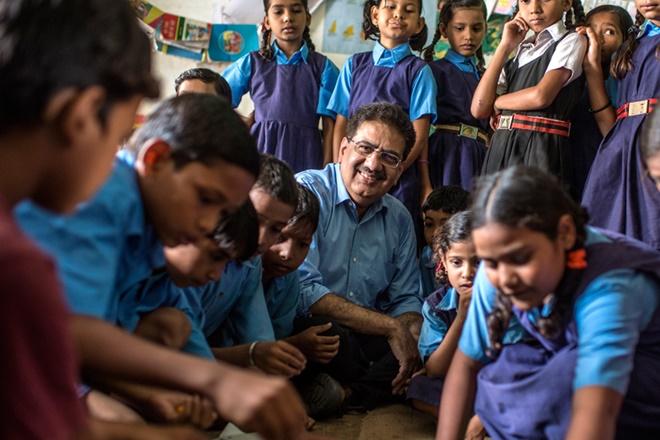 Vineet and his wife Anupama Nayar are founders of Sampark Foundation in India, which boasts a 0 million outlay funded entirely by the Nayars and represents more than half of their wealth. (Photo courtesy: Atul Loke/Forbes)

Five Indians, including two couples, have featured in Forbes Asia’s Heroes of Philanthropy list announced by the magazine on Thursday.

Bain India CEO Amit Chandra (48) and his wife Archana Chandra, CEO of Jai Vakeel Foundation have give 75 per cent of their earnings each year to causes from education to health care, the magazine said.

Vineet and Anupama Nayar, founders of Sampark Foundation in India, which boasts a $100 million outlay funded entirely by the Nayars and represents more than half of their wealth. The foundation is rolling out kits with child-friendly teaching aids to 50,000 government schools and 3 million students across Uttarakhand and Chhattisgarh.

Another notable philanthropist who featured in the list is Adar Poonawalla, CEO of Serum Institute of India, who pledged $15 million last year to clean up Pune city near Mumbai with a fleet of 50 garbage trucks and a crew of 70 people.

The list honours 40 philanthropists from 13 countries across Asia Pacific. “The list not only features philanthropists who have made the news with their donations in the past year, but also recognizes people who have compiled a long record of supporting worthy causes. Honorees include a mix of billionaires, businesspeople and captains of industries who are also making a mark with their generosity, ” the magazine said.

Globally people who have featured in the list includes, China’s Pony Ma, Chairman and CEO of Tencent Holdings, who pledged 100 million shares of his internet service provider – worth $2.3 billion – to the Tencent Foundation, which supports healthcare, environment protection and new technology. Another notable philanthropist from China is Wang Jianlin, Chairman of Wanda Group, who pledged $150 million to job creation, training and other assistance in a 5-year effort to uplift DanzhaiCounty in Guizhou Province, a poor region in southern China.