As the financial crisis of 2008 fades into the past, corporate executives are having to navigate an unbalanced global economic recovery, marked by supercharged growth in the developing world and painfully slow growth in the mature economies that suffered most during the downturn.

Multinational corporations such as YUM! Brands and Manpower Inc., lured by the eye-popping pace of growth in China and other emerging markets, are investing aggressively there, breeding more growth and inflation.

Those same executives, seeing slow growth and uncertainty over government budget and regulatory policies, are proceeding cautiously in the advanced economies, exacerbating the sluggishness that makes businesses wary in the first place.

The unbalanced world economy is likely to be a major theme as executives, government officials, academics and journalists gather at the World Economic Forum in Davos, Switzerland, which kicks off Wednesday. It's also one force behind the new focus on national competitiveness sounded by President Barack Obama in his State of the Union address Tuesday night.

Evidence of this two-speed global recovery is widespread.

YUM!, the fast food chain, will build roughly 900 KFC, Pizza Hut and Taco Bell restaurants this year; 80% of them will be in emerging markets. A stand-alone China division will add another 500 to 600 stores.

"The big opportunities in our category are in the developing world," says Graham Allan, who runs the international division of Yum! "We intend to go after it."

AkzoNobel, a Dutch manufacturer of paints, plans to open two stores a day in China and is pouring money into a Brazilian pulp and paper business. Chief executive Hans Wijers says his biggest worry in emerging markets is: "Are we growing fast enough?" In the U.S. and Europe, meanwhile, he worries about having excess capacity.

Federal Mogul Corp. , a Michigan auto-parts supplier that emerged from bankruptcy protection in 2008, eliminated 11,000 jobs during the recession, most of them in North America and Europe. Since the recession ended it has hired 4,000 workers—half in emerging markets.

Manpower, a U.S. staffing firm, says 95% of its new office openings this year will be in emerging markets such as Poland, India, China and Vietnam, 100 to 125 new offices in all.

In many emerging markets, it's as if the downturn never happened. In China, annual purchases of cars and trucks have soared from five million in 2005 to more than 18 million in 2010. In the U.S. and Europe, sales are still below pre-crisis peaks. General Motors Co. sold more cars in China last year than in the U.S.

Money is pouring into the hot emerging economies, creating inflationary pressure that policy makers are having trouble containing. Foreign exchange reserves—central bank holdings of foreign currencies—have risen sharply since the crisis. At more than $5 trillion, they are six times their level a decade ago, according to calculations by the Federal Reserve. China holds about half of the total, slightly more than $2.6 trillion. 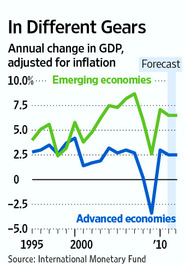 The International Monetary Fund estimates that emerging markets will see an annual economic growth rate of 6.5% in 2011 and 2012, while the world's advanced economies will expand at a rate of 2.5%. In the developed world, "growth remains subdued, unemployment is still high, and renewed stresses in the euro area periphery are contributing to downside risks," the IMF said in a recent report.

Kenneth Rogoff, a Harvard professor and former chief economist at the IMF, says the growth differential is likely to be wider over the next decade than it was over the last decade. Developing economies, in turn, he says, are "going to be facing a lot of pressures from their success."

As growth patterns shift, Vineet Nayar, chief executive of HCL Technologies, a fast-growing Indian outsourcing firm, sees the mindset of executives shifting. Before the crisis, he says, many firms based in rich countries were content to rely on domestic consumption. Today their leaders are unhappy with domestic markets "and hungry," he says. At the same time, executives in developing economies before the crisis "had aspirations but didn't have the confidence.

Today they have a huge amount of self-belief that was not there a few years ago."

The survey is not all bad news. In PWC's 2010 report, only 27% expected to do more hiring in Germany; in the current report, 62% do. And 55% expect to hire in the U.S., up from 39% last year. Another silver lining for U.S. companies: Many are pouring money into research and development in search of a global competitive advantage, which could in turn create opportunities for workers back home. "They are investing hugely in innovation," says Mr. Nayar.

And executives are less worried about the big rich countries closing their markets to emerging-market rivals. Trade protectionism ranked in PWC's survey as a worry in 2009 and 2010 but fell off the list in 2011. "These markets today are so interconnected, protectionism is not a way to solve these problems," says Dennis Nally, chairman of PWC's international division.

While enjoying the fruits of rapid growth, developing countries face perils from this period of unbalanced growth. One threat is overconfidence, a key ingredient in the technology and housing bubbles that plagued the global economy during the past decade and in the financial excesses in Asia in the 1990s.

"The euphoria which was there among the emerging countries, especially China and India, is going to be tempered a little by concerns about overheating and concerns about asset bubbles," says Nariman Behravesh, chief economist at IHS Global Insight.

He is particularly concerned about a real-estate bubble forming in China. The value of all of the homes in China, he estimates, is about 3.5 times the value of its annual economic output—a ratio with alarming implications because it suggests housing there is overvalued. The U.S. ratio of home values to economic output was much lower, at 1.8, during its recent housing bubble. "There is reason to worry," says Mr. Behravesh.

Policy makers in the fast-growing emerging world are having a hard time stemming such asset price increases, or brewing inflationary pressures. China's currency is pegged to the dollar, a link that limits its ability to raise interest rates to control inflation. It could allow the currency to appreciate more, but exporters are pushing against this because they see the cheap currency as a way to spur sales abroad.

Other emerging economies, like Brazil, have raised interest rates and allowed their currencies to appreciate but are reluctant to go too far.

Investors are growing worried that some central bankers may already be behind the curve in preventing inflation and may have to raise rates more than expected this year. Those fears have pushed stock indexes in India and China down by 7% and 4% this year even as the S&P 500 is up nearly 3%.

Policy makers from Brazil to Taiwan are intervening directly in foreign exchange markets to hold down their strengthening currencies. They do this by scooping up dollars and selling their own currencies. Some are also restricting the flow of capital into their markets. But there's no model for getting that policy balance just right and avoiding unstable capital markets.

"The consequences of these ad hoc interventions are not well understood," says Ramin Toloui, co-head of emerging market at investment giant Pacific Investment Management Co, or PIMCO. "It creates a new set of question marks and risks."