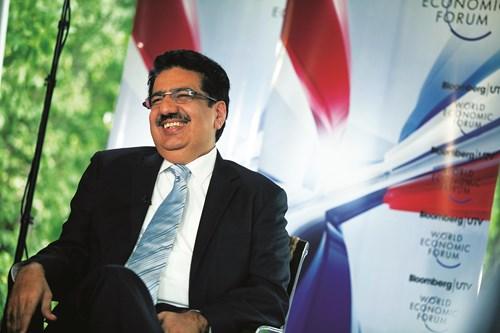 Vineet Nayar has spent his life challenging attitudes to leadership and management. Here he talks exclusively to douglas morrison about his work at tech giant HCL, his philanthropic foundation and why employees should come before customers

"I am a sucker for problem solving," says Vineet Nayar in a deadpan assessment of his career to date. As one of India's most successful entrepreneurs and philanthropists, he is also a master of the understatement.

Nayar has been solving problems one way or another for most of his working life, most successfully as the former CEO of India's HCL Technologies and more recently at his not-forprofit Sampark Foundation.

This interview is therefore timely, taking place just a few days after the historic election of another great problem solver, Narendra Modi, as India's Prime Minister. Following a record turnout, Modi's landslide victory has at a stroke resolved the persistent problem of weak governance that has beset past Indian leaders and administrations.

"We were choosing a leader who clearly defined his vision of a more assertive, more growth-orientated and more developed India," says Nayar. It was, as he suggests "a watershed election" for India.

Nayar has been a vocal supporter of Modi, not least because he sees a kindred spirit. They both talk of empowering ordinary people as a means of bringing about change, which in Nayar's case means the beneficiaries of the Sampark charity as well as those in the corporate workplace.

Nayar's approach to both HCL and Sampark has been enshrined in his highly acclaimed management book, Employees First, Customers Second: Turning Conventional Management Upside Down, which has sold 100,000 copies since publication in 2010 – an impressive tally.

The book's worldwide success is one reason why this interview is taking place on the line to New York, where Nayar is conducting workshops for companies that want to hear how he transformed HCL from a sleeping giant of Indian IT into a powerhouse of a company operating out of 32 countries while achieving a 600 per cent increase in revenues to $4.6 billion – and all in just seven years. He says more than 70 companies across the world have approached him for some Employees First wisdom on the back of his best-seller status. Following the New York workshops he is off to Mexico for more of the same.

Not content with high-end consultancy, Nayar is a serial blogger, whether for the Harvard Business Review or on his own website. He is also wise to the quick-fire power of Twitter for getting his ideas across to as wide an audience as possible. As one of his recent tweets proclaimed, "Businesses can grow twice as fast and double shareholder value by making employees their competitive advantage."

As Nayar's 19,144 followers would doubtless testify, this tweet sums up the principles spelled out in the book.

If nothing else the book's title is a masterstroke in marketing, appearing wholly counter-intuitive when set against the customer-isking mantra of so much management thinking. In fact, the Employees First principles do not marginalize the customer at all. On the contrary, by inverting the conventional management pyramid and empowering the employees, Nayar argues that the customer ultimately gets a better experience and as a consequence, of course, the company generates value for itself – everyone is a winner. That was the premise on which he took over as HCL's President in 2005 and set about reinvigorating a company that was losing market share.

"Everybody at that time was obsessed with technology, wanting it to be faster, better. But the smart guys were saying, it is not technology but consumer experience. The same is true with Google and Facebook," he says. Going further back, the same was true of Japanese car makers – one of Nayar's original sources of inspiration. "They said, it's not the car you manufacture but how you manufacture it."

Nayar could have tackled what every management guru goes on about ("product, price, proposition … all that stuff") but the real value creation lay in changing how HCL was run.

Nayar's management principles were honed during his time at Comnet, the technology services company he founded in 1993, which though under the HCL umbrella also attracted outside investors such as JP Morgan. The entrepreneur in Nayar spotted a gap in the global IT market for so-called remote infrastructure management and today, Comnet is a $1.4 billion business line for the company. Countless start-ups involve great ideas that come to nothing but Comnet was also, as Nayar suggests, "a hotbed" of management innovation.

"That was the stage on which I experimented with all my ideas on management," he recalls, "and the reason the implementation of all those ideas was simple was because it was a start-up organisation and I was the CEO. There was no history and the people came in because they believed in the core values and management principles which we were propagating. Later on when we thought about it, the ideas and experimentation in Comnet were much easier compared to taking on a traditional organisation that has 20, 30 years of history and enthusing about a new management idea."

By 2004 and ready for a new challenge, Nayar was preparing to leave the group and devote his energy to Sampark, which he established that year to improve education and living conditions in rural India. But he agreed "reluctantly", to become CEO of HCL and apply his management principles on the big corporate stage. He stepped down in January 2013 after 27 years with the group and eight at its helm. As he says now: "The proof for me of Employees First, Customers Second succeeding is not the 600 per cent growth in seven years but the growth HCL demonstrated after I stopped being the CEO. The growth is as fast if not faster."

Nayar is 52 now and no less ambitious – his targets for large-scale social change through Sampark take problem-solving to a new level. In many respects though, the principles are the same. In both the executives he helps in business and the people he helps through Sampark, Nayar talks about how the desire for change must come from within.

Nayar claims that some of the foundation's projects have already led to a 30 per cent improvement in the livelihoods of the people affected. They are the beneficiaries of what he calls "frugal innovation" where the initial objective is to be able to replicate philanthropic or social initiatives easily and cheaply. The cost of a schools project in Punjab, for instance, works out at $10 per child in a combination of teacher aids and "teacher empowerment" through monthly workshops. It is early days but Nayar hopes that 250,000 children will benefit from that initiative.

"You could have solved the problems theoretically by giving them computers and that is the difference between affordability of innovation and non-affordability," says Nayar. He is withering in his criticism of companies ("especially technology companies") that give large but thoughtlessly.

All of which gives Nayar a valuable perspective on India. As he writes in the Sampark literature, India has moved forward in stature and wealth but the same cannot be said about the Indians. "The poor are still poor and find it more and more difficult to seek employment leading to enhanced livelihood."

Yet he is nonetheless optimistic for India under Modi's leadership. According to Nayar, the emphatic nature of the election victory has given Modi such a strong mandate, leading inevitably to better decision-making in government, and that in itself will drive the GDP growth rate to six per cent and higher.

In the weeks leading up to the May election Modi's was a business friendly campaign with much focus on job creation and economic activity – critical issues given that the World Bank ranked India as low as 134 out of 189 countries on its latest ease of doing business index. Such is the weight of expectation on Modi that in the days immediately after he became Prime Minister $600 million was reportedly pumped into Indian stock markets by foreign institutional investors.

Nayar sees Modi as the right man for the challenges facing the country, and at the right time. "I get a sense that he is a leader who is not just going to take the responsibility for changing India on himself, which he will definitely do. But he will push the population and say to the people, 'you need to own the change you want to see."

It is no different to what Nayar is saying in his book and at his corporate workshops, and to the "millions of people who are at the bottom of the pyramid" and potentially benefiting from his foundation. "That's what excites me," he adds, "to be in touch with people and working to frame large-scale problems and solve them is what I want to do for the rest of my life."

Vineet Nayar's long association with India's HCL Technologies began in 1985 when he joined the group as a management trainee after completing an MBA from Xavier School of Management.

Nayar worked his way up to general manager before founding the Comnet offshoot in 1993 and turning this technology services business from start-up to a market leader in a decade.

By 2005, Nayar was in charge at HCL as first president and then CEO, and leading a turnaround that would result in a six-fold rise in revenues and market value by the time he stepped down in 2013.
This business success is encapsulated in the best seller, Employees First, Customers Second: Turning Conventional Management Upside Down, which has won numerous accolades, not least securing Nayar a place on the 2011-12 Thinkers50 List, which is a definitive listing of the world's top business thinkers.