Early in Vineet Nayar’s tenure as leader of HCL Technologies, he had an important message for his troubled company.

It was 2005, and the India-based technology services company was losing market share as well as its ability to attract top talent. Nayar had a vision of revitalizing the 25,000-employee organization by flipping its hierarchy upside down and giving frontline employees unprecedented power. But how to make sure he was heard? At an employee meeting in Chennai, India, he started by letting his feet do the talking.

“I put on some Bollywood music and started dancing,” Nayar said. “In about 10 minutes, everybody in the hall was dancing. Nobody knew why.”

Nobody, that is, but Nayar.

What he knew was that people need inspiration to reach new levels. And doing what’s least expected can be the best way to inspire.

A willingness to experiment with counterintuitive, radical approaches to managing people didn’t just turn a room of dispirited techies into a frenzied dance party. This formula also allowed Nayar to turn around HCL Technologies and make a splash along the way with his concept of Employees First, Customers Second. This idea — dubbed EFCS in HCL-lingo — upended conventional business wisdom by declaring employee empowerment, worker well-being and organizational transparency central to success. His 2010 book on the subject has sold more than 100,000 copies. 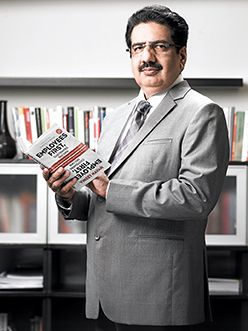 ‘How would someone learn anything unless it is fun? First be happy, then be effective.’

Nayar’s initial fame as a visionary business leader comes with some question marks. In a way, he has merely spruced up the old idea of decentralized management. The EFCS approach also carries risks, including making workers more cynical than ever, and may not be the best choice for all companies.

But to many observers, Nayar has proven himself a pioneer of employee empowerment and a leader in an enlightened management movement that has emerged out of India.

Nayar grew up in a small Indian town in the foothills of the Himalayas. But he was not isolated in his ideas. He and his family were captivated by the Kennedy clan and its example of public service. Then, when he attended business school in India, an American Catholic professor left a deep impression.

In the middle of class, the Rev. Edward McGrath went to check a noise in the hallway and was overrun, it seemed, by assailants wielding knives and spears. Mayhem ensued. But it was all staged. And in the aftermath, McGrath had students write down what they observed. Accounts varied wildly, making the point that perceptions can be subjective.

But that wasn’t the biggest lesson for Nayar that day in the mid-1980s. Seared into his psyche were two other take-aways.

First, shake up your audience. “If you want to say something, say it in a way no one will ever forget,” Nayar put it recently.

Second, try to take people to the next level. Nayar remembers thinking: “I want to be in the business of inspiring people to do something that they never ever would have thought themselves as capable of doing.”

Those two lessons can be seen at work in Nayar’s surprising dance in Chennai two decades later. To get to that moment, though, he took a boomerang-shaped journey. Nayar’s first job after business school was at HCL Technologies’ parent company, HCL. He spent seven years there focused on helping the company develop new technologies. He then left to start up his own firm. In 1999, HCL acquired that company. Nayar came back to HCL, and served a variety of executive roles for several years.

During that time, things got hard for HCL. The company had been one of the first India-based firms to offer U.S. and European companies lower-cost “offshore” technology services such as implementing, upgrading and debugging business software applications. But HCL faced tough competition, including bigger Indian players like Infosys and Tata Consultancy Services as well as U.S.-based firms like IBM Corp.

HCL’s board tapped Nayar to lead a turnaround. And one of his first steps was to grab the attention of the firm’s employees. Not only did he dance in front of staff in Chennai, but also he took his talents to operations across the globe. The point of the three-week exercise, he said, was to create a fresh, exciting start. At each site there was dancing, then serious deliberations.

“Now that we enjoyed ourselves, let’s talk about what’s wrong with the company,” he said. “Suddenly now the company has a completely new buzz. Why? Because people thought I was crazy.”

The counterintuitiveness didn’t end there. Nayar knew he wanted to move the company beyond the commodity business that basic information technology services had become. The goal was to rise up the “value chain” and become more of a partner with clients, offering services such as product development outsourcing and technology strategy consulting.

Nayar also was struck by something about meetings he had with clients. Even if HCL executives were in the room, the clients almost always were more focused on the front-line HCL employees who worked directly on their accounts. Front-line employees, Nayar came to believe, were the real source of value and the vehicle for moving HCL forward.

To make his priorities clear, Nayar in 2005 coined the term “Employees First, Customers Second.” He describes the ensuing years as an exercise in tinkering. Those trials centered on three major areas: increasing employee authority, expanding communication and transparency, and paying more attention to employees’ desire for economic security.

The firm demonstrated it was serious about employee empowerment partly through the creation of a “value portal,” where any “HCLite,” as they are known, could submit ideas for providing greater value to clients. These ideas coming directly from rank-and-file HCL programmers were visible to clients, who could seize upon them.

Nayar also radically reformed performance management. He decided to have managers held accountable to workers by conducting 360-degree reviews of leaders and encouraging managers to publish the results. He went first in 2005, and by 2007 more than half of the firm’s 2,282 managers disclosed the feedback they got.

Other democracy and transparency initiatives included extensive use of employee opinion polls, executive meetings with rank-and-file workers over company strategy and U&I, an online forum allowing employees to communicate directly with Nayar.

In his last years at HCL, Nayar took employee empowerment a step further. He introduced the concept of value points, whereby all employees voted for which of their colleagues were creating the most value for the organization. He sees this initiative as a kind of internal stock market, where top performers are recognized and celebrated.

At the same time, HCL has heeded employees’ wishes for income and job security. Early on, Nayar nixed an incentive program that had left much of a worker’s annual compensation contingent on earning a bonus in favor of “trust pay,” where workers were assumed to deserve the full bonus unless they underperformed badly. And the CEO pledged — and followed through — on a promise not to lay off any employees during the course of the global recession that hit around 2008.

Nayar’s experiments have largely paid off. Employees at first used the wider communication channels to ask about tactical matters like delayed performance reviews. But over time, more strategic and valuable suggestions poured in, including ideas for new product offerings that HCL adopted. HCL’s turnover dropped and revenue jumped. During the time he led HCL from 2005 to 2013, revenue increased sixfold, from $764 million to $4.57 billion. Profits and market capitalization increased by the same factor.

As HCL’s dramatic story became better known, Nayar became a management celebrity of sorts. He began blogging for Harvard Business Review in 2008 and soon after wrote his book about EFCS. Among other accolades, he was selected by Fortune in 2011 to be part of its “Executive Dream Team.” Fortune also called HCL “the world’s most modern management.”

There are questions regarding the uniqueness of Nayar’s ideas, and about how wise it is to adopt the EFCS concept at other organizations. John Boudreau, a management professor at the University of Southern California, notes that the concept of decentralized management dates to Japanese manufacturing in the 1980s and before that to thinkers like W. Edwards Deming and Peter Drucker.

In addition, inverting the corporate hierarchy along the lines of HCL carries risks. “Flatter” organizations can conceivably be slower in their decision-making, if teams and groups must achieve consensus. In addition, inviting employees to contribute ideas can make them cynical if leaders fail to acknowledge or respond to them. Boudreau said HCL avoided this problem by devoting major energy to answering questions and comments from workers, but noted that other organizations may fail to properly engage with a vociferous workforce.

Boudreau teaches a case study about EFCS to business students. But he emphasizes that it was a sound strategy for a company needing to provide higher-touch services to ascend the value chain. Another company might be better served by investing in technology to automate operations and save costs, rather than concentrating on its employees, he said. “I don’t know that I’d recommend it for everybody,” he added.

Others are more effusive about Nayar’s impact. Peter Cappelli, a management professor at the Wharton School at the University of Pennsylvania, puts Nayar’s influence in the context of a broader movement led by Indian executives. Key features of this Indian approach to leadership include a public mission, a focus on providing compelling value to customers and investing in talent as well as an uplifting culture.

It was uncommon for Indian organizations to embrace transparency or to allow employees to share ideas and teach more senior level officials, said Cappelli, co-author of “The India Way: How India’s Top Business Leaders Are Revolutionizing Management.” Nayar helped change that.

“He has been a leader in India,” Cappelli said, “especially in this idea of openness and learning inside the organization.”

Over the past year or so, Nayar has been testing the empowerment concept with a different population: kids in rural India. Through his philanthropic foundation Sampark, he aims to improve the education received by 250,000 children in the state of Punjab. More broadly, he talks about wanting to improve “livelihoods by 30 percent.” It’s a mission in keeping with the Kennedy-esque inspiration of his own childhood.

Not surprisingly, Nayar started the education reform effort by asking the kids what problems they saw. The main complaint: boring textbooks and lessons. So Nayar and his group started making Indian myths with heroes and adventures central to math and other instruction, along with activity-based learning.

If the experiment works, it will boil down to the formula Nayar has long followed. The same one that had him dancing in front of HCL employees years ago. Surprise them, and then set them straight. “How would someone learn anything unless it is fun?” he said. “First be happy, then be effective.”