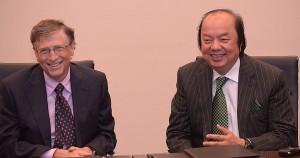 This is our seventh annual project highlighting the generous and often innovative efforts of the Asia-Pacific region's most notable givers. We feature biotech entrepreneur Kiran Mazumdar-Shaw, who's working to improve cancer care in India. And, below, we spotlight the 2013 crop of 48 leading philanthropists in the region.

As with every year, some of our altruists have embarked on big projects--funding new departments at universities or launching campaigns to improve the lives of the rural poor. Others aim to make their mark in more targeted ways, paying for holiday homecomings for low-income workers or boosting a city's library system. Some are billionaires who have built wealthy foundations and are now wrestling with issues of transition. Others are famous singers or actors who are using their star power to promote their favorite causes. All are leaving the region a powerful legacy--whether it's museums, symphony orchestras, a global project to eradicate polio, rural kindergartens, free health clinics or help for war refugees.

In past years we've listed a total of 216 philanthropists. This year four of these previous honorees--Australia's Andrew Forrest (and his wife, Nicola), India's Azim Premji, Malaysia's Vincent Tan and Taiwan's Samuel Yin--signed the Giving Pledge, an effort by Bill Gates and Warren Buffett to get the world's richest to give at least half their wealth to philanthropy. They are the first four in the region to sign the pledge. Indonesia's Tahir hasn't signed the pledge yet but his foundation did pledge $25 million in April toward an ambitious health-care objective: eradicate polio by 2018. The Bill and Melinda Gates Foundation is matching that amount. The donations are part of a $200 million public-health initiative over five years that will attack infectious diseases such as tuberculosis, malaria and HIV. Each foundation will put up $100 million.

How do we choose these outstanding donors--4 from each of 12 Asia-Pacific countries? The selections are subjective: Figures for contributions aren't always available so a ranking by size of donations isn't possible. Instead we aim for a mix of people and causes. We also try to identify an entirely new group of philanthropists each year, though a few people here are returning to the list because of a newsworthy donation or project announced in the past year. And we pick only true philanthropists--people who are giving their own money, not their company's (unless they own most of the company), because donating shareholder funds isn't charity.

We also don't list people who work in philanthropy as foundation heads, volunteers and fundraisers but aren't able to donate sizable sums themselves. They're crucial to carrying out the projects outlined here, but we want to focus on the people writing the checks. Of course, many people here do several things--they donate their own money while also fundraising and having their company kick in some funds. That's fine as long as actual philanthropy is behind the effort.