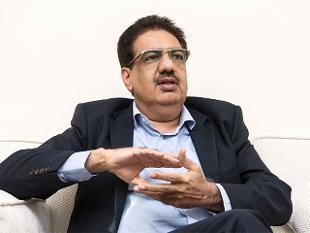 NEW DELHI: Named among Asia's top givers, technology veteran Vineet Nayar has fixed a "shutdown" year for his philanthropy aventure Sampark Foundation, which has got a $100-million outlay funded entirely by him and his wife.

Nayar said Sampark would shut down by 2025 -- a kind of self-imposed expiry date -- and its contributions will stay even after the last rupee in the endowment is spent.

Nayar, who has been named on Forbes Asia's Annual Heroes of Philanthropy list for the second time, had earlier served as chief of IT major HCL Technologies and set up the Sampark Foundation along with his wife Anupama.

Talking about his venture and why he wanted it to "die" in 2025 unlike his earlier ventures that he built to last, Nayar said, "I believe social sector needs urgency for change -- with limited time on our hands, we would innovate and make change happen other than wait for change to happen."

He added: "This is a different experiment. It's like this: If you knew you had only three months to live, you'll live your life differently."

The Sampark Foundation was started in 2005 by the Nayars. The Sampark Smart Class Program today covers 3 million children studying in 50,000 schools in UttarakhandChhattisgarh , making it one of the world's largest primary school transformation initiatives by a Foundation.

"We did not want Sampark to become about us -- that mistake we did not want to make as you can kill an organisation when you get confused between its reason for existence and its ownership."

By declaring "a dead date", "the ideas will survive as they are open source, but the ownership will die which is the way every organisation should think about itself".

The goal of the Foundation, according to its website, is to significantly improve quality of education for 10 million children by 2020. The Nayars have committed Rs 650 crore to promoting the cause of transformative learning through frugal innovation in government schools in India.

"The fact that we would not exist beyond 2025 will force us to transfer ownership of change to government stakeholders and make the change more sustainable," he said, adding that "radical ideas bring radical change".

"If you are an innovator, you need to innovate and test old rules of management -- internally and externally," Nayar said.